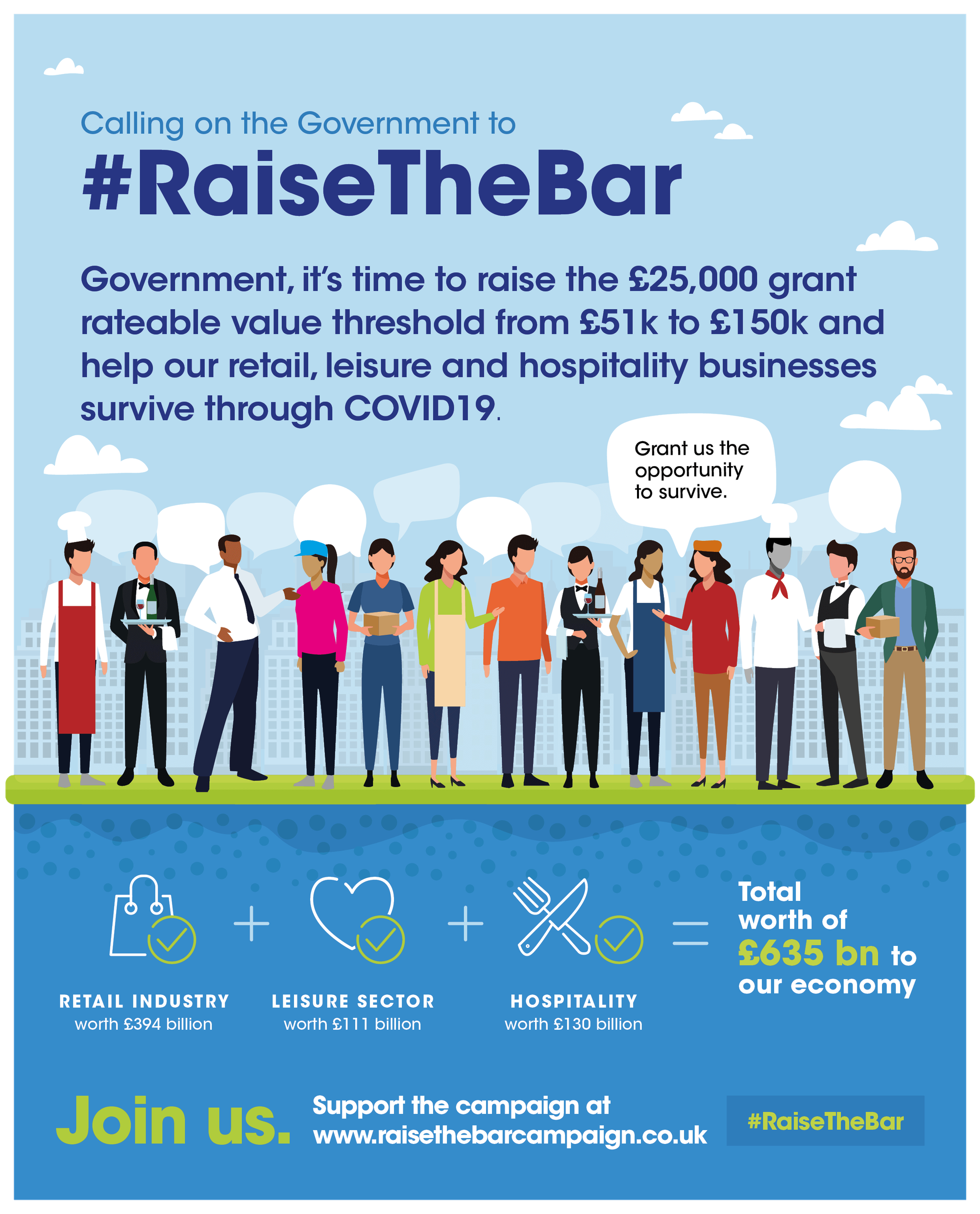 RE: Seven weeks to save the nation’s high streets – it’s time to #RaiseTheBar

In light of the Prime Minister’s address to the nation on 10 May, we are writing to you on behalf the #RaiseTheBar campaign and 100,000 retail, hospitality and leisure businesses across England and Wales that have been closed for over 50 days in order to support the need for the public to stay at home, protect the NHS and save lives. These businesses are still unsure as to how the Government will support them during a time of extended closure.

Since we first wrote to you on Tuesday 21 April, the #RaiseTheBar campaign has received significant cross-party support including that of 86 fellow Conservative MPs who issued a letter to the Chancellor of the Exchequer on Friday 1 May. The #RaiseTheBar campaign is further supported by industry leaders, 95 Business Improvement Districts with our Change.org petition securing over 12,000 signatures so far.

The retail, hospitality and leisure sectors contribute £635 billion to the national economy, employing over 5.3 million people in pubs, shops, restaurants, galleries, arts venues, cafes, clubs, bars and hotels. These businesses are equally as important within the supply chains they operate in. The threat to these businesses has an immediate, detrimental impact to the rest of the supply chain, placing other businesses and livelihoods at risk including food and drink suppliers, logistics, maintenance and cleansing services.

There is a deepening concern that tens of thousands of businesses within these sectors are teetering on the edge of the abyss with many expecting widespread permanent closures in the next seven weeks as we approach the next rent quarter on Wednesday 24 June.

There is a significant risk that these businesses, the lifeblood of our high streets and communities, will be unable to support the stimulation of the nation’s economy without further intervention from Her Majesty’s Treasury.

The Discretionary Fund of £617m to accommodate small businesses outside the scope of business grant funds does not go far enough to support those businesses with a rateable value of £51,000 or more and furthermore, relies upon the discretionary decision-making processes of each local authority with no guarantees of support.

We are calling on the Government to provide a lifeline to tens of thousands of businesses who must responsibly stay closed by making the following amendment to the Retail Hospitality and Leisure Grant [RHLG]:

To expand the business rates threshold for all retail, hospitality and leisure businesses from £51,000 to any business with a rateable value up to and including £150,000, allowing further businesses the opportunity to access the £25,000 grant

The cost of offering this financial lifeline, assuming all 54,638 businesses applied for the grant is calculated at £1.365 billion.

In light of the serious economic damage to the economy, we urge Rt. Hon Rishi Sunak to honour, in full, the pledge made earlier this year on Tuesday 17 March:

‘Will not be overcome by a single package of measures or isolated interventions. It will be won through a collective national effort, every one of us doing all we can to protect family, neighbours, friends, jobs. This national effort will be underpinned by Government interventions in the economy on a scale unimaginable only a few weeks ago. I want to reassure every British citizen this Government will give you all the tools you need to get through this. I said whatever it takes, and I meant it.’

We call upon Rt. Hon. Matt Hancock MP to honour his response to The Sheffield Star when asked about raising the business rates threshold on Monday 27 April at the daily Government media briefing.

We request that the First Secretary of State, Rt. Hon. Dominic Raab provide an update as to his discussions with HM Treasury on raising the threshold following concerns raised by his constituents.

Businesses across these three sectors are desperately looking for the Government to make the right decision and to support those left very much isolated and stranded from grant based schemes such as the RHLG.

In supporting our industries and the businesses that deliver within them, our economy will be far richer for it and far better prepared to support the economy as we navigate our way together through this crisis.