What is Sheffield BID?

Sheffield BID is a Business Improvement District scheme and governed by national legislation. In February and March 2015 all eligible businesses in Sheffield City Centre received a copy of the BID prospectus and were asked to vote on the creation of a BID through a postal ballot. Businesses voted by a majority ‘Yes’ to indicate they were in favour of having a city centre BID. The current term of Sheffield BID runs until 31 March 2021. A renewal ballot will be held in early 2021.

Sheffield City Centre BID Limited is the not for profit organisation that is the accountable body for delivery of the Sheffield BID.

Is the BID unique to Sheffield?

No. A BID is a scheme developed in accordance with the Business Improvement District (England) Regulations 2004 within which businesses and other stakeholders contribute a levy determined by a prescribed formula. This creates a fund to develop responses to impediments to growth, or to improve the trading environment in which they operate.

There are currently more than 300 BIDs now operating in towns and cities across the UK.

Who can set up a BID?

The BID can be proposed by any non-domestic ratepayer, property owner, local authority or other stakeholder with an interest in the BID area.

How is a BID created?

A BID is created by a ballot of those businesses who would be liable to pay the mandatory levy. The ballot is run by the local authority (the Ballot Holder). There is no minimum turnout threshold but the BID proposal must clear two hurdles.

What is the purpose of a BID?

The BID must carry out specified projects for the benefit of the BID area, or those who live, work and carry on any activity within it. However, its primary focus is businesses in its area, specifically those who contribute by paying the levy.

What is the BID area?

The Sheffield BID area, also referred to as the BID boundary, is based on the former inner city ring road as shown on the BID area map. A list of all streets included in the city centre BID area can be found within the BID prospectus. 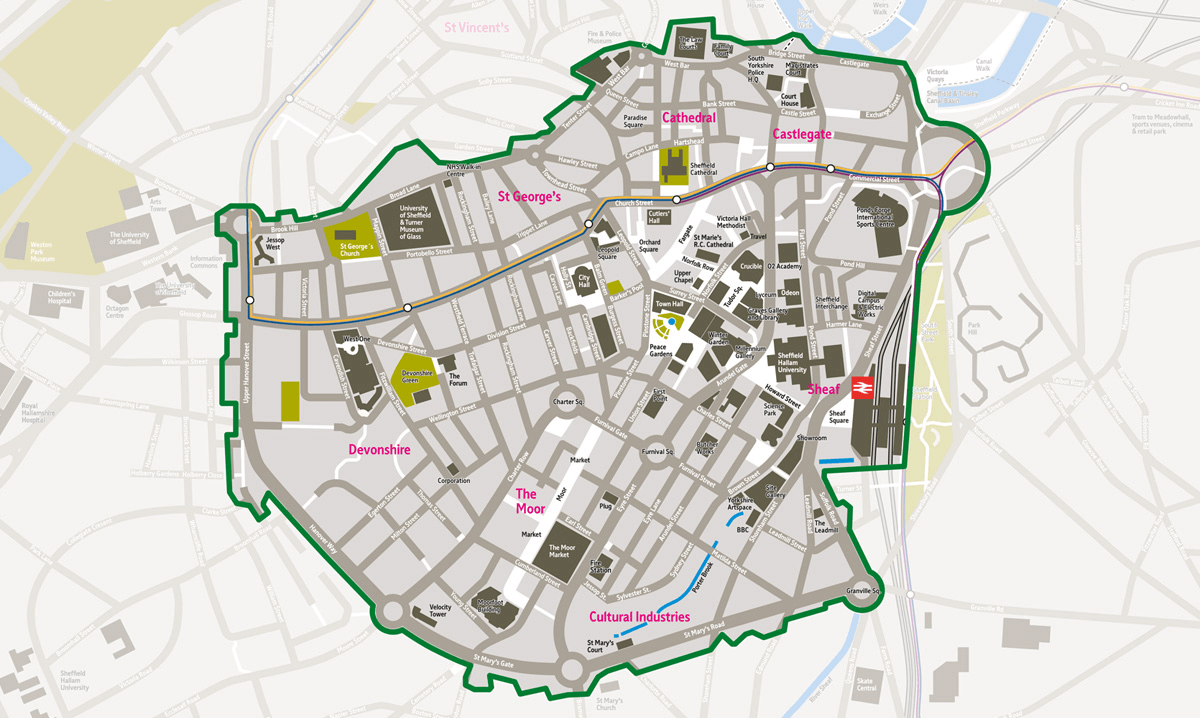 Who approves a BID?

The Local Government Act 2003 gave local authorities in England & Wales the power to approve the formation of a BID (if local businesses agree) and to collect the BID levy that will fund improvements.

What is the BID levy?

The BID levy is a charge payable in respect of rateable business hereditaments within the defined boundary of the BID. It is calculated by applying a modest percentage to the rateable value of a property. Levies fluctuate across the BID industry from one to four percent. In Sheffield, the BID levy is held at one percent.

Who pays the levy?

How is the levy calculated?

In the current term to 31 March 2021 it is calculated annually using the 2010 rateable value of the property and no account is taken of future rating revaluations unless a property appears for the first time in a future rating list.

An annual bill is issued every August for the period August to July. In August 2020 the BID levy bill will be prorated to 31 March 2021.

Who collects the BID levy?

How long does the BID last?

Once balloted the term of the BID runs for a maximum of five years. The BID must seek a renewal ballot to carry on its activities into a further term. Sheffield BID's first term was due to end on 31 July 2020.

Sheffield BID's first term has therefore been extended to 31 March 2021 and a rescheduled renewal ballot will be held in early 2021.

What is the Council's role in the BID?

In accordance with the Business Improvement Districts (England) Regulations 2004, the Council is by law the billing authority for any BID in Sheffield, which means it is responsible for the collection of BID levies. It is not responsible for providing the BID services because there is an independent accountable delivery body - Sheffield City Centre BID Limited ("Sheffield BID").

Why is the levy only mandatory on hereditaments with an RV of £40,000 or more?

BIDs can set a minimum threshold to ensure the number of hereditaments to be included is manageable, and that hereditaments do not include non-trading entities (e.g. cashpoints, radio masts, telephone boxes etc.). Sheffield BID is mindful of the hereditaments that are excluded, particularly where small businesses in key streets make up the fabric of a community, but voluntary levies paid directly to Sheffield BID through associate membership is an option for businesses below the threshold.

How much BID levy is collected for the city centre BID?

The nett collectable debt differs year on year but on average, £800,000 per year is collected through the Sheffield BID levy.

I am eligible for rates relief - will I still have to pay my BID levy?

Yes. Your BID levy is calculated using rateable value and liability terms set out by the BID. The only other link between rates and the bid levy is that the levy is collected by the local authority. At this point, the relationship ends. Once collected, the levy revenue comes directly to us at the BID, to spend on local priorities which are identified by levy payers as important (and therefore detailed in our business plan). Business rates, on the other hand, are not all retained by the local authority - usually 50% of the revenue goes to central government.

Sheffield BID, in line with hundreds of other BIDs around the UK, was established to raise sustainable revenue and to use this to fund targeted improvements in the trading environment that are often not supported by local authority or national government funding.

Are there any caps on the BID levy?

Yes. BID legislation allows BIDs to set a maximum amount that any levy payer will pay. On a single property the maximum payment for the Sheffield BID is £15,000 and for those businesses operating multiple hereditaments using the same trading name and whose annual combined BID levy liability exceeds £60,000 will have its total contribution capped at this sum.

Do the Council and other public sector bodies pay the BID levy?

Yes. Sheffield City Council and the public bodies must pay the levy on hereditaments within the BID area for which they are liable to pay business rates.

Can I opt out of the BID?

No. The BID is legally binding on all eligible business ratepayers in the BID area.

Does every business pay the BID levy?

Businesses occupying hereditaments with a rateable value of £40,000 or more pay the BID levy. Hereditaments classified for business rate purposes as schools or hotels are exempt from the BID levy. Please see the 2015-2020 BID Prospectus for details of the governing BID rules for the current term.

Why are hotels exempt?

Hotels are part of the tourism visitor economy and the challenge of delivering high-quality tourist-related services at a local level, and the marketing and promotion of destinations required to retain visitors from within the UK and attract tourists from overseas requires a different funding model.

What happens to the money collected through the levy?

The funds collected through the levy can only be used to pay for BID services and the Council’s costs in collecting the levy. Through an operating agreement, the Council holds the funds received in the BID revenue account and make payments to the BID Company to pay for the BID services that are provided by the Company. Annually with your bill you will receive details of how the levy is being spent.

Aren’t these services already provided by the Council?

No. By law the services provided by a BID must be additional services not already provided by the Council, or enhancements to existing services.

I won’t benefit from BID services, why should I pay?

The BID levy is a charge payable by law and not a payment for services received. If you have an enquiry about how you can benefit directly from BID services, please get in touch with the BID office.

I voted against the BID or wasn’t eligible to vote at the time of the ballot. Do I still have to pay?

Yes. The result of the BID ballot held in March 2015 was binding on all eligible business ratepayers in the BID area from 1 August 2015 to 31 July 2020. This includes persons or organisations who become ratepayers after the date of the ballot.

Is there an increase in the BID levy each year?

Some BIDs do make provision within the BID rules for an annual inflationary increase. However, the Sheffield city centre BID levy is held at 1% for the duration of the five-year term.

The property is unoccupied, do I still need to pay?

Yes. The ratepayer for an unoccupied property is also liable to pay a BID levy.

Can I pay by instalments?

No. The BID levy is payable in one payment due on 1 August each year or 14 days after the issue of the levy demand notice whichever is the latter.

What should I do if I can’t pay?

If you have genuine financial difficulty and are unable to pay, then you should contact the Council at bidcollection@sheffield.gov.uk as soon as possible.

What happens if I pay for the year then cease to be liable?

Whoever is listed as the ratepayer at the time the annual bills are issued remains responsible for the BID levy for the whole year. No refunds will be issued. However, if you move into a property part way through the BID’s financial year, you will not have to pay until the next bills are issued.

This is the accountable body for delivery of the city centre BID. The Company is a not-for-profit private company limited by guarantee with a board of non-executive directors drawn from businesses who pay the BID levy. This Company was appointed as the BID body through the first ballot process in March 2015. It will also be the proposer for renewal of the BID which will see businesses re-balloted for a second five-year term in early 2021.

Who do I contact with an enquiry about the BID?